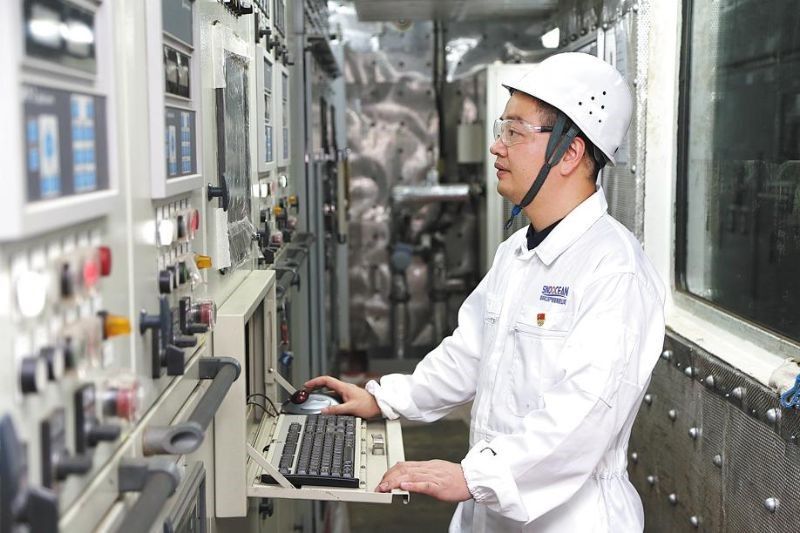 An engineer of Sinoocean Offshore Assets Management Ltd, a China Chengtong unit, works at a drilling platform in the Persian Gulf. [Provided to China Daily]

China will establish a new logistics conglomerate this year to better facilitate its foreign trade and supply-side structural reform, said business executives involved in the move on Tuesday.

The new group will be formed by a number of subsidiaries from logistics businesses owned by Beijing-based China Chengtong Holdings Group Ltd, a State-owned asset management company, and China Railway Materials Group Corp (CRM), which is also supervised by China Chengtong on behalf of the State-owned Assets Supervision and Administration Commission, the country's top State assets regulator.

"We will promote the orderly reorganization and integration of our logistics sector, synergizing China's high-quality resources to build a comprehensive logistics group with complete business, wide coverage and strong competitiveness," said Shan Zhongli, board director of China Chengtong.

Together with CRM's businesses in railway equipment and construction, logistics and oil businesses at home and abroad, the new group will be a formidable force to help develop China's modern circulation system, he added.

Based in Beijing, CRM has more than 100 branches in China, the United States, Australia, Laos and other countries and regions. It is a major supplier of railway oil and provides railroad maintenance and logistics services domestically.

As the government pledged that it will actively cultivate and in a timely manner establish new centrally administered SOEs in industries such as power transmission and distribution equipment manufacturing, grain reserves and offshore engineering to deepen the country's supply-side structural reform and support innovation-based growth earlier this year, Zhu Yue, China Chengtong's vice-president, said, adding the group has actively participated in the reform of equity diversification to assist the implementation of major reforms of central SOEs.

Following the government's policies, China Chengtong has invested more than 76 billion yuan ($11.78 billion) in cash to give full play to the role of active shareholders, and actively took part in the reorganization and integration of key industries such as oil and gas pipeline network, steel, electrical equipment and modern logistics, as well as equity diversification reforms.

The new manufacturing group was established in Shanghai on Saturday as a step to speed up the growth of China's advanced manufacturing with a goal to be first-class in the world.

Liu Xingguo, a researcher at the China Enterprise Confederation in Beijing, said that promoting strategic reorganization of central SOEs is a practical measure to improve the efficiency of resource allocation.

"Not only will this measure accelerate the cultivation of world-class enterprises with global competitiveness, it is also key to helping maintain the stability of industrial and supply chains," Liu said.

Amid steady economic operations and sustained external demand, China's 96 central SOEs saw their profits soar 72.9 percent year-on-year to 2.08 trillion yuan in the first eight months, while their revenue surged 23.3 percent on a yearly basis to 26.62 trillion yuan, said the Ministry of Finance.