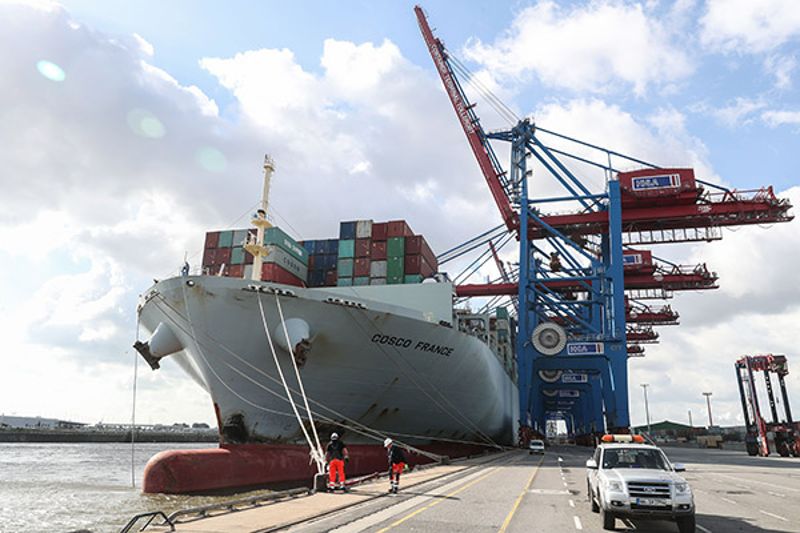 China's 25,000 twenty-foot equivalent units or TEU of exported goods arrive in Hamburg, Germany. In 2016, around 30 percent of TEU to Hamburg were from China. [Photo/Xinhua]

The China Structural Reform Fund plans to help its clients deploy more resources in consumption upgrading, elderly care and core chip technology to put their growth on a firmer footing.

The CSRF, a venture that aims to establish a sub-fund to support State-owned enterprises' reorganization, is China's biggest investment fund raised from SOEs.

It is now aiming for a corpus of 350 billion yuan ($53 billion). It will inch toward the half-way mark by firming up 131 billion yuan in the first phase of its formation, which will end by September of 2018.

A further 65.5 billion yuan is expected by the end of next year.

"The fund is a market gauge of the effort to push forward SOEs' structural reform using State capital," said Zhu Bixin, president of the CSRF.

According to Zhu, the fund has invested in a number of SOEs already, including China Metallurgical Group Corp, Air China Ltd and Power Construction Corp of China Ltd.

The fund has invested 1.8 billion yuan so far in Air China and will pour more money into the airline, to push the latter to the next higher level and to fund its structural reform and fleet expansion, including the purchase of 15 Boeing-B787 aircraft.

The fund also aims to bolster financially troubled SOEs, stabilize their operations and deleverage the market.

"The CSRF invested 2.25 billion yuan to set up an industrial fund with Aluminum Corporation of China Ltd," Zhu said. "The fund will strengthen the supply-side reform in the alumina processing sector."

In the future, the CSRF will augment investment in high-tech and high-end equipment industry, including sectors such as third-generation nuclear power plants, the internet of things, big data, robots, premium healthcare and intelligent manufacturing.

Wei Ran, general manager of China Chengtong Asset Management Co Ltd, which manages the fund, said another fund is being readied for the emerging sector.

"We are mapping the strategy for infrastructure for the coming age of the internet of things," said Wei.

"Whether it's new energy vehicles, new energy, big data or cloud computing, they will all rely on data storage infrastructure. As the 5G era is coming, we need efficient market measurement to accelerate the setting up of such infrastructure."

Wei said the company is currently in talks with sub-funds of China General Nuclear Power Group and China Nuclear E&C Group. The fund is also considering participation in overseas acquisitions.

Shen Ying, chief accountant of the State-owned Assets Supervision and Administration Commission or SASAC, said the fund has done well so far but it still has a long way to go.

"The practice of the past year has proved market measurement to be an efficient way in supply-side structural reform, SOE reform and the use of capital," Shen said. "It explored a new way in State-owned asset management and supervision.

"The CSRF needs to stay ahead of the market, enhance market research and risk control awareness to play a greater role in the deepening of supply-side structural reform."